“If your pictures are not good enough, you are not close enough.” – Robert Capa

Well, that’s what Robert Capa said. But, who was Mr Capa?

Robert Capa was the “greatest combat and adventure photographer” in history. If you are not in the photography business or have got nothing to do with cameras, you would probably not know him. An accidental photographer like many of us, he becamse a legend because of the way he dealt with his profession – dedication and commitment.

The said quote was in the context of war photography. Robert Capa lived and died during an age when there were no fancy photographic equipment. And in that age, more often than not, one had to walk in to the thick of action to get that appealing frame. We are talking about bombs going off all around, bullets whizzing past ears. That thick of an action! And it was this “getting close” part which helped Capa in capturing some of the most dramatic photographs of the wars that he covered.

How is the quote relevant for me in this age, when we have all the fancy equipment we can think of: super-zoom telephoto lenses, the best sensors, and what not? How is it relevant for me when I have not seen a live combat in my entire life? Combat as in when people are trying to kill each other! And most importantly, how is it relevant in my life? Read on for the revelation!

Capa’s quote in the context of photography:

On a scale of one to telephoto lenses, how lazy are you? That’s a weird scale, isn’t it? Not when we are discussing photography.

For me, capturing people was always difficult. I was shy by nature. I was not comfortable talking to strangers. For this reason, most of the times I came across as arrogant. When I say capturing people, I do not mean staying in my comfort zone, taking out that telephoto lens and start capturing people from far off. And then, out of those thousands of photos chose one that is reasonably good and call it “candid”. Well, nothing wrong in that! Nothing wrong other than the fact that I would be bull-shitting, if I say “I capture people”. So, to challenge myself, I took up making portraits.

The photographs where the subjects look right at the viewer, I find these photographs as most intriguing. I feel these are the photographs which connect with the viewer instantly. And to capture those, the subject must be aware, and one needs to abandon all the inhibitions and ask for permission from a total stranger. That is the thrill part!

And that is the level of involvement (“getting close” in Capa’s words) one needs, irrespective of the genre of photography. All or nothing, I tell you!

With time, as I develop my skills of making a portrait, I am also developing my people skills. Now, I do not mind approaching a total stranger and ask for permission to make a portrait. If it is a “yes”, you can see the result in the portrait above. And if is a “no”, I take it in the stride and keep working on my smile.

While making portraits, how do I know how close is close enough? Well, definitely not so annoyingly close that I am encroaching my subject’s personal space. But close enough to capture the right emotions.

Below is yours truly in action, while making the portrait above. That close is close enough, I think. 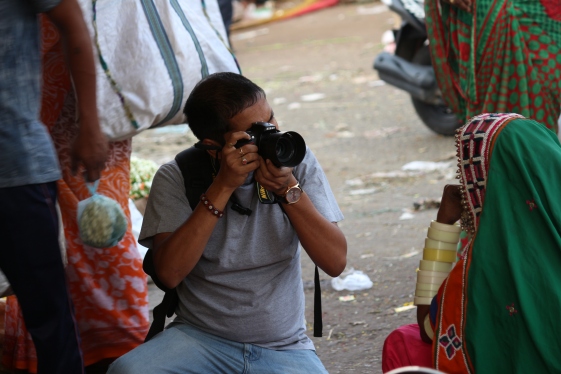 I have never been caught in action, except for this one time, all thanks to my good friend Amit Kumar Singh.

Capa’s quote in the context of life:

I am going to tweak that original quote slightly.

“If your life is not interesting enough, then you are not living it from close enough.”

Well, you are alive, aren’t you? And what part of “being alive” do you find not interesting?

Capa lived and died in an age when there were no fancy photography equipment, in an age when photographers had to “make” photographs. Yes, he died at a young age of 40 back in 1954, when he stepped on a landmine while covering the French Indochina war. He had a love story too! He was engaged to Gerda Taro, another combat photographer, who was killed in the Spanish civil war in 1937. Capa contributed primarily to Life magazine. He clicked some of his most famous photos when he accompanied Allied troops during D-day invasion, in World War II. He was the co-founder of Magnum Photos. For all his association with war and death, here is his second most famous quote:

“I hope to stay unemployed as a war photographer till the end of my life.” – Robert Capa

In frame: A flower seller in Gudimalkapur flower market, Hyderabad, Telangana, India. I initiated the talk by asking if I could take pictures of the marigold flowers she was selling, and she agreed. After the photographing the marigolds, I asked if I could make her portrait, and she agreed but said it is going to cost me. So, we bargained and settled for a “nominal” amount. So much for people skills.

Also, I have used a 3-step Brenizer technique here, for the first time. These are three photographs from top to bottom merged in to one.