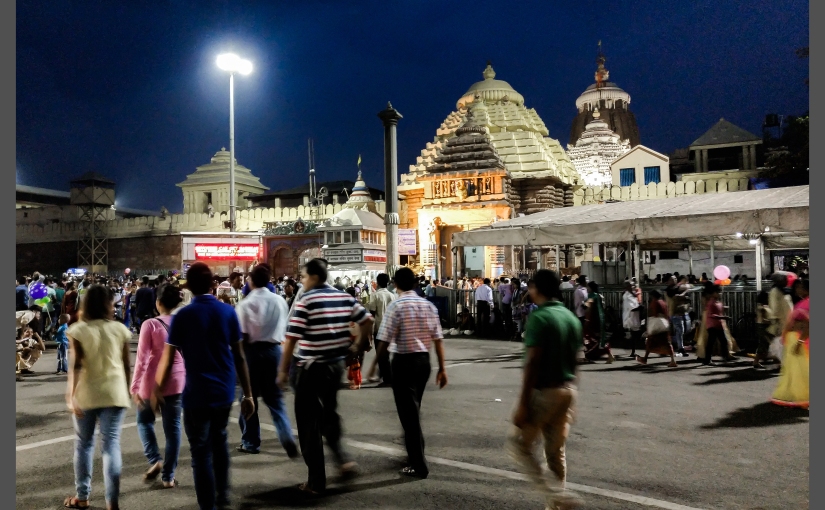 It was a mad rush inside the temple. And owing to my short height, it was impossible for me to have a glance at the deities, let alone having a good look. So, I tugged at my father’s shirt and asked him to pick me up and hold me in his arms so that I could take a good look. I was curious to understand what was all the fuss about these three half-finished deities sitting on that raised platform. And he picked me up! I saw He had a pleasant smile on His face, His big round eyes seeing everything, and His arms extended to embrace everyone.

I was 9 when I last had the opportunity to go see Lord Jagannath and His siblings in His abode in Puri. Year 1991 was the year of Godavari Pushkaram, the most recent one being in 2015. Hindus consider it auspicious to take a dip in the waters of Godavari during that time. And it is considered to be even more auspicious if you visit Jagannath Puri after the holy dip in Godavari. So, we did! Needless to say, it was a road-trip – from my hometown in southern Odisha, to Rajahmundry on the banks of Godavari, in Andhra Pradesh, to Jagannath Puri in Odisha and back to my hometown.

We were staying in one of my uncle’s house in one of the narrow by lanes of Puri. Those were the days when there were no mobiles and no internet, and in the name of TV channels we had only Doordarshan. Unlike kids of today, we had no option but to have fun. So, my parents did not have to pester me and my brother to get ready to go out with them to explore Puri. I have only faint memories of Puri. What I strongly remember from that evening however, is the feeling of not feeling one’s legs from all the walking. The year was 1991!

Then I “grew up”, and started having a “life”. I travelled the length of coastal Odisha many times, but never got a chance to revisit Puri. Then, like any other good Hindu, I blamed it on Him – “Jagannath hasn’t called me to visit him yet”. And in the meantime, 26 years went by.

Lord Jagannath and his siblings are as human as Gods can get. As human as visiting their aunt every year (Rathyatra) to getting ill after spending too much time in the water (Snana Yatra) to fighting with the spouse (Hera Panchami) to leaving the old body and consecrating into a new one (Nabakalebara).

So, I visited Him after 26 years. And guess what! He looked all the same to me, like He did when I was 9 years of age. The same pleasant smile on His face, His big round eyes seeing everything, and His arms extended to embrace His whole creation. He is cool, I realised! May be a little but upset with me because I took 26 years to come back, but He was cool!

This being the month of May, it was very humid inside the temple. And because of the repair work going on in the Jagamohan (the assembly hall in front of the sanctum sanctorum), devotees are not allowed to have a closer look. Yes, His abode needs repairs too! That’s why I said He is as human as a God can get.

My visit to Puri lasted for only 90 minutes. Getting a glimpse of Him was my only purpose in Puri this time, and I was glad that I succeeded. And I realised that He calls us all the time, it is us who fail to comply and blame Him instead.

I plan to visit Puri again during Rathyatra this year, to relive my childhood memories, and after doing so bring you back the stories of Lord Jagannath and Puri.

In frame: Street outside the Jagannath temple in Puri, Odisha, India. It is called Bada Danda in Odia, literally translating into Grand Road. Kindly bear with lower quality of this photo. It was taken using my mobile and not my DSLR, as I am carrying only my 35mm film SLR this time as part of a challenge to myself.